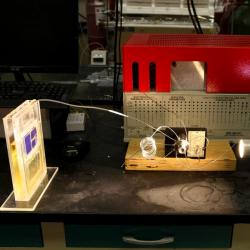 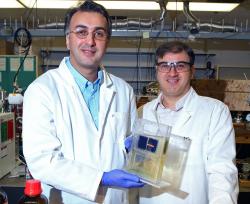 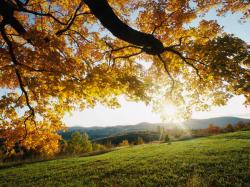 Electrochemical or photochemical reduction of carbon dioxide (CO2) could in principle conveniently recycle the greenhouse gas back into fuels (1–6). However, existing catalysts are too inefficient in practice (7–11): Either weak binding interactions between the reaction intermediates and the catalyst give rise to high overpotentials, or slow electron transfer kinetics result in low exchange current densities. Both of these metrics depend not only on the intrinsic electronic properties of the catalyst, but also on the solvent and the catalyst morphology. Recently, we reported that three-dimensional (3D) bulk molybdenum disulfide (MoS2) catalyzes CO2 reduction to CO at an extremely low overpotential (54 mV) (12) in an ionic liquid (IL). Here, we report 2D nanoflake (NF) architectures of this and other transition metal dichalcogenides (TMDCs) that manifest much higher performance for electrocatalytic CO2 reduction in the IL 1-ethyl-3-methylimidazolium tetrafluoroborate (EMIM-BF4).

CO2 reduction activities of similarly sized (~100 nm) TMDC NFs including MoS2, WS2, MoSe2, and WSe2 were tested using a rotating disc electrode. All TMDCs were grown using a chemical vapor transport technique (13). Figure 1A shows cyclic voltammetry (CV) results of WSe2 NFs, and bulk MoS2 as well as Ag nanoparticles (Ag NPs) and bulk Ag as a representative noble-metal catalyst. All experiments were performed inside a two-compartment, three-electrode electrochemical cell (fig. S6) using an electrolyte of 50 volume percent (vol %) EMIM-BF4 and 50 vol % deionized water; this composition gives the maximum CO2 reduction activity (13). The polarization curves of all studied catalysts were obtained by sweeping potential between +0.8 and –0.764 V versus RHE (reversible hydrogen electrode; all potentials reported here are based on RHE) with a scan rate of 50 mV s−1 (Fig. 1A and fig. S8). We also performed chronoamperometry at different applied potentials for WSe2 NFs. The results indicate that the obtained current densities for all applied potentials are 10 to 20% less than the CV results with 50 mV/s scan rate (fig. S9). The difference is attributed to the charging current (capacitive behavior) in the CV measurements.

The catalytic performance of TMDC NFs was compared with that of other reported catalysts (Fig. 1D) by multiplying current density (activity) by CO formation FE (selectivity). At 100 mV overpotential, the performance of WSe2 NFs exceeded that of bulk MoS2 and Ag NPs tested under identical conditions in an ionic liquid by a factor of nearly 60. The performance of WSe2 NFs also exceeds those of Au NPs (17) and Cu NPs (18) by three orders of magnitude. Additionally, at this overpotential, the performance of WSe2 exceeded that of WS2 and MoSe2 NFs by factors of 3 and 2, respectively (Fig. 1D). We also performed chronoamperometry experiments to examine the electrochemical stability of WSe2 NFs in 50:50 vol % IL/deionized water. At the applied potential of –0.364 V (0.254 V overpotential), a small decay (10%) was observed after 27 hours of continuous operation of the three-electrode two-compartment cell (fig. S14) (13).

The photochemical performance of WSe2/IL was also studied using a custom-built wireless setup. This artificial leaf mimics the photosynthesis process in the absence of any external applied potential. The cell (Fig. 2A) (13) is composed of three major segments: (i) two amorphous silicon triple-junction photovoltaic (PV-a-si-3jn) cells in series to harvest light, (ii) the WSe2/IL cocatalyst system on the cathode side for CO2 reduction, and (iii) cobalt (CoII) oxide/hydroxide in potassium phosphate pH = 7.0 (KPi) electrolyte on the anode side to catalyze the oxygen evolution reaction (19–21). Because the CO2 reduction and oxygen evolution reactions in the artificial leaf system are electrically coupled together through the photovoltaic, the production and consumption rates of electrons and protons are equal on the anode and cathode sides of the cell. When the reaction starts, proton (H+) generation is initiated in the KPi solution (anode side) through the oxygen evolution reaction (decreasing the initial pH of 7); on the IL electrolyte (cathode side), the CO2 reduction reaction consumes H+ available in the IL electrolyte (increasing the initial pH of ~3.2). During this transient period, diffusion of the K+ ions through the proton exchange membrane from the anode to the cathode side compensates the charge imbalance to achieve charge neutrality (fig. S17) (13). However, after this period (~5 min), the pH in the KPi solution and the IL approaches ~3.4, where the operation of the artificial leaf system reaches steady state and H+ diffuses in place of K+. Our measurements indicate that 1.43 × 10−4 M K+ diffuses to the IL in the transient stage and that its concentration remains constant under steady-state operation. This quantification is consistent with the change in the H+ concentration (1.52 × 10−4 M) on the cathode side. The PV-a-si-3jn cell can function continuously for 5 hours (fig. S18) before corrosion of the transparent indium tin oxide layer on the anode inhibits operation (fig. S19) (13). However, replacing the PV-a-si-3jn cells restores performance to its previous level.

(A) Schematic of the cell design. (B) Rate of product formation (mol/s) with respect to different Sun illuminations. (C) Calculated solar-to-fuel efficiency (SFE) of photochemical process using the WSe2/IL cocatalyst system. Our calculation indicates ~4.6% SFE, which is limited by the maximum efficiency of PV-a-si-3jn (~6.0%). Error bars indicate uncertainty in the calculated SFE (table S5) (13).

To test the stability of ionic liquid (50 vol % EMIM-BF4 in water) and KPi electrolytes, we replaced the PV-a-si-3jn cells every 4 hours for a cumulative time of 100 hours. Results shown in table S3 (13) indicate that, within error margins, the same molar quantities of CO and H2 were produced during each 4-hour period of the 100-hour-long operation of the artificial leaf, confirming the durability of both anode (KPi) and cathode (50/50 vol% IL/water) electrolytes. We also observed no significant change in the pH of the solution after 100 hours (13). Moreover, our calculations (13) indicate that a negligible amount of water (~0.018 ml/hour) is produced during the CO2 reduction reaction on the cathode side relative to the total volume of electrolyte (100 ml of IL/water) used in our experiment.

Figure 2B shows the molar rates of product formation with respect to simulated solar illumination (number of Suns). The respective yields of CO and H2 measured by GC follow an approximately 10:1 ratio for the entire range of illuminations. This result is consistent with our FE measurements obtained at higher overpotentials in the three-electrode electrochemical setup. We also calculated the solar-to-fuel conversion efficiency (SFE) for our photochemical process (Fig. 2C), obtaining a value of ~4.6% limited by the maximum efficiency of the PV-a-si-3jn cell (~6.0%) (13, 20). This SFE is higher than that of the water-splitting reaction (~2.5%) previously measured using an identical triple-junction photovoltaic (PV-a-si-3jn) cell (20). Our measurements indicate that the SFE of the system remains stable for 5 hours of continuous operation (fig. S20) (13). The SFEs of the artificial leaf during 100 hours of operation (with successive PV-a-si-3jn replacements) are shown in table S6.

Next, we performed electrochemical impedance spectroscopy (EIS) at 150 mV overpotential to measure the charge transfer resistance (Rct) for WSe2 NFs, bulk MoS2, and Ag NPs catalysts (13, 22–24). A charge transfer resistance is correlated to the number of electrons transferred from the catalyst surface to the reactant (25–27) as well as intermediate formation inside the double layer (22, 23). Our experimental results (Fig. 3) indicate that the Rct of WSe2 is ~180 ohms, versus ~420 ohms for bulk MoS2 and ~550 ohms for Ag NPs.

To characterize the atomic arrangement of edge atoms, we performed scanning transmission electron microscopy (STEM) analysis on several liquid-exfoliated monolayers and multiple layers of WSe2 NFs (fig. S23A) (13). The line intensity profile of single-layer WSe2 NF (fig. S23B) indicates that the edges of the nanoflakes are W-terminated. Moreover, STEM analysis on the edge atoms after 27 hours of chronoamperometry (fig. S14) indicates a stable atomic structure of W edge sites (fig. S23, C and D). These results suggest that transition metals with d-orbital electrons on the edge sites mainly contribute to the CO2 reduction without any evidence of instability over time. X-ray photoelectron spectroscopy data further verified the long-term stability of the catalyst (fig. S24, A to D) (12, 13).

Density functional theory (DFT) calculations were performed to gain insight into the catalytic properties of the TMDC NFs (13). The calculated reaction free energies of the CO2 → CO pathway using a computational hydrogen electron approach at zero potential (28) show that the formation of COOH* is highly endergonic and is the rate-limiting step for both Ag(111) and the Ag55 cluster (Fig. 4A). The Ag55 cluster requires less energy than Ag(111) to form COOH* because of the presence of undercoordinated Ag atoms of the cluster. This result explains the lower overpotential of Ag nanoparticles relative to bulk Ag, in agreement with other studies (7). COOH* formation is similarly endergonic on other metal surfaces such as Pd, Au, and Cu (7, 29, 30). However, on the metallic edges of the TMDC NFs, COOH* formation is exergonic because of strong binding to the TMDC metal edge sites. The CO* is also much more stable on the TMDC NFs than on Ag, residing at lower energy than COOH*. This energetic ordering suggests that the formation of CO* from CO2 is kinetically more favorable on the TMDC NFs than on Ag (Fig. 4A) resulting in lower overpotentials. In addition, the calculated projected density of states of the edge metal atom (Mo or W) reveals that the d-band centers of these metal edges (Fig. 4, B and C, and fig. S26, A to D) (13) are much closer to the Fermi level than those of the Ag(111) surface, further supporting the strong binding interactions of the adsorbed intermediates with the TMDC NFs (31, 32). However, the strong binding of CO on the TMDCs also inhibits desorption of CO, which becomes the rate-limiting step in the TMDC systems. Previous studies have indicated that the coverage of the adsorbed intermediates significantly affects the binding energies (33, 34). We further investigated the effect of CO coverage on the metal edge of the TMDCs and found that each metal atom on the TMDC edge can bind up to two CO molecules (θCO ≤ 2 ML) (13). The binding energy per CO on a metal atom (when θCO = 1 ML) ranges from 0.8 to 1.1 eV (Fig. 4A), whereas the binding energy per second CO on a metal atom (when θCO = 2 ML) decreases to 0.3 to 0.5 eV. This finding suggests that the metal edges of the TMDCs likely have high CO coverage (θCO > 1 ML) during the catalytic reaction to maintain a high turnover rate.

We also calculated the work functions of the monolayers of the four TMDCs (fig. S27). Our calculations show a trend of MoS2 > WS2 > MoSe2 > WSe2, consistent with experimental measurements of the work functions (fig. S22) (13). This trend of work functions correlates with the trend of the experimental activities as measured by current densities of the four TMDCs, suggesting that the electron transfer properties of the TMDCs play an important role in the electrochemical reduction of CO2. In this case, WSe2 has the lowest work function and is the best TMDC for CO2 activation among the tested materials.

The ionic liquid also plays an important role in the CO2 electrochemical reduction. Our previous study suggested that the EMIM+ ion helps transport CO2 to the catalyst surface by complexation under acidic conditions (12). Overall, we attribute the exceptional performance of the present catalysts to a combination of low overpotentials and efficient electron transfer properties of the TMDC NFs and the IL-enhanced local CO2 concentration.

Re: Re: Text clanku bez grafov